Nearly 60 real estate management professionals traveled from across the country to Washington D.C. to take part in the IREM Capitol Hill Fly-In March 6–7. With more than 100 congressional offices visited during the Fly-In, IREM Members made the case that what happens in the halls of Congress can considerably affect constituents back home.

“It was great to have so many IREM Members travel to D.C. and discuss issues critical to property management with their legislators,” said IREM President Don Wilkerson, CPM, from Reno, Nev.

“The Fly-In gave our members the opportunity to discuss the future health and growth of the property management industry with their representatives,” echoed Denise Froemming, IREM CEO.

“The excitement over the last day and a half was palpable” stated George Griffin III, CPM, who is vice president of housing operations for the Houston Housing Authority, AMO, and this year’s IREM senior vice president focused on government affairs. “Members were able to walk the halls of Congress and establish or continue relationships with their federal legislators. Not only did we build relationships but we also educated lawmakers on important issues affecting our industry, such as reauthorizing and reforming the National Flood Insurance Program (NFIP) and asking for guidance regarding companion animals.” 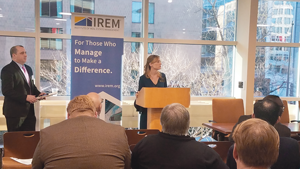 The meetings with federal legislators were preceded by an orientation conducted at the National Association of REALTORS® (NAR) Building in Washington. With its view of the Capitol just a few blocks away, the NAR building provided the perfect setting for an indoctrination into the inner workings of Congress. The program included a panel of former legislative staffers discussing how to conduct successful meetings with legislators and providing advice on pitfalls to avoid that could ruin the meetings. Among the advice they gave: Stick with the facts. Create a connection based on the legislator’s state or district. And don’t be offended if you meet with a staffer. As was pointed out during the orientation, having a good relationship with staff can make or break your cause.

“It was terrific to hear from former staffers on how to navigate meetings,” said Charlene Tucker, CPM, president of the IREM Delaware Valley Chapter. “It really prepared us to have effective and impactful meetings with our representatives.”

One of the two issues IREM carried to Capitol Hill was the NFIP, a partnership among federal, state and local governments that helps mitigate flood risk and provides affordable flood insurance to those who need it most. “Long-term reauthorization and reform of NFIP is long overdue,” communicated Lucinda Lilley, CPM, president of the IREM San Diego Chapter. “It was so great that we had the opportunity to have a face-to-face discussion with our legislators on how this issue is affecting our industry and the need to provide stability and reform to the program.”

NFIP has been repeatedly extended over the past several years, with the most recent extension as of this writing continuing the program through May 31.

While there is a growing private market for flood insurance, millions of small business and homeowners currently depend on the federal program to protect their property against losses due to flooding, the most costly and common natural disaster in the United States. Without the NFIP, more property owners could become uninsured and turn to the federal government for taxpayer-funded disaster relief and rebuilding assistance after major floods.

Because IREM is very concerned about the availability and affordability of property insurance, legislators were asked to resolve this problem by:

The second issue on the IREM legislative agenda pertained to challenges presented by companion animals. A companion animal, also known as an emotional support animal, is an animal (typically a dog or cat, though this can include other species) that provides a therapeutic benefit to its owner through companionship. The number of prospective and current renters requesting a reasonable accommodation under the Fair Housing Act (FHA) to allow companion animals has been on the rise. Likewise increasing are the number of requests that appear to be abuses and are in fact efforts to avoid pet fees or obtain housing in otherwise pet-free communities. 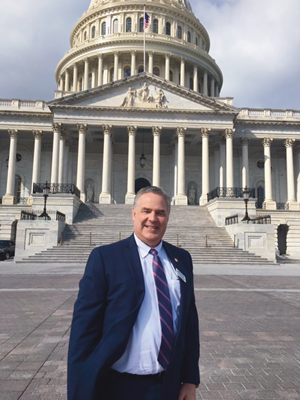 The challenge arises with the lack of specific guidance on how managers and landlords can comply with the FHA when fielding legitimate requests for reasonable accommodation while addressing those who are abusing the situation. The U.S. Department of Housing and Urban Development (HUD) has indicated that guidance will be forthcoming, and IREM Members asked their legislators to urge the release of this much-needed guidance as soon as possible.

“It is imperative we work with our legislators to encourage HUD to issue guidance on this important issue,” asserted Dawn Carpenter, CPM, of the IREM Greater New York Chapter. “Property managers need guidance, as companion animals have become more and more prevalent over the last few years.” Carpenter is also a former member of IREM’s Federal Housing Advisory Board, which regularly meets with HUD to discuss federal housing issues.

Unlike service animals, which are regulated by the Americans with Disabilities Act (ADA), companion animals receive no specialized training and are typically for individuals with mental disabilities or those in need of emotional support. Members communicated that traditionally, to have a companion animal, documentation would be provided by a doctor, therapist or mental health expert, describing the individual’s disability or psychological problem and recommending a companion animal as an intervention. Recently, the process has been streamlined through technology and sometimes compromised in unscrupulous markets as well. Not only have property managers been presented with documents purchased through unethical online therapy websites, they have also encountered tenants who have asked for reasonable accommodation for multiple animals in one unit, restricted breeds and animals living in communities that are established as pet-free.

The Capitol Hill Fly-In presented one opportunity to connect with legislators—but not the only opportunity. When they are not in Washington D.C., Members of Congress typically can be found back home at their in-district offices. “While we look forward to coming back to D.C. in the spring of 2020, this is not the end of the conversation with our representatives. This is just one of many touchpoints for members to connect with their legislators,” said Griffin. “Members can reach out to their legislative offices any time or during IREM advocacy events, such as during our Congressional Briefing in July, our In-District Program in August and our Legislative Wrap-Up in December.”

Ted Thurn (tthurn@irem.org) is director of government affairs at IREM Headquarters in Chicago.

The case for hiring a CPM to manage federally assisted...

Always on your side