Long-Term Implications of the Midterm Elections

What the results could mean to the real estate management industry—and how IREM will stay involved.

The number was a midterm record high—37 percent more voters turned out than in 2014. As 2019 gets underway and political pundits, reporters and federal legislators examine how the midterm results influence the political landscape for the next two years, IREM will also be evaluating how they might affect the real estate management industry and how the association may approach its positions on issues moving forward.

Once the votes were tallied, Democrats gained 40 seats in the House and lost none, giving them a solid majority of 235 seats over the GOP’s 199 (one election is still undecided). Over in the Senate, Republicans flipped 2 seats, resulting in 53 total and a majority confirmed.

Not only was the election record-breaking in terms of voting numbers, it also sent an unprecedented number of women to Congress. More than 100 women will serve as members of the House, surpassing last Congress’ record number of 84 women. Michigan notably went above and beyond by selecting a woman for every statewide office—Governor, U.S. Senator, Attorney General and Secretary of State.

Although Congress usually focuses on spending bills during the lame duck session, IREM members advocated to keep the National Flood Insurance program (NFIP) from lapsing. If the program had expired by its November 30 deadline, flood insurance would have become more costly or even unavailable.

Fortunately, another short-term extension was passed by Congress to keep the program open. It was the eighth short-term extension of the program since 2017. “Although we will continue to advocate for legislation that includes long-term NFIP reauthorization, we greatly appreciate Congress not allowing the program to lapse, which would have led to millions of citizens without flood insurance,” said Amy Hedgecock, CPM, chair of the IREM Legislative and Public Policy Committee.

Framing the Issues for 2019

Since there will be a divided government over the next two years, along with ongoing and possibly new presidential investigations, the conventional wisdom predicts that major legislative initiatives will fail to move through the lawmaking process.

The ADA Education and Reform Act (H.R. 620), which addresses “drive-by” lawsuits, would fall under the major legislation category. The bill would close the loophole in the law which has unintentionally produced the drive-by ADA lawsuits. The main drivers in these lawsuits are attorneys who are forcing a monetary settlement consisting mainly of attorney’s fees that only benefit the attorney and do little to increase access for the disabled.

Passing the bill will be very challenging, as many House Democrats, who are now the majority in the House, are aligned with disability groups that oppose the legislation. However, IREM and its coalition partners are already working with Senate Democrats on a separate ADA reform proposal. Senate Democrats have indicated they are interested in developing language which would penalize lawyers who file frivolous ADA lawsuits.

Infrastructure could be one of a few areas of partnership between Democrats and Republicans, with members of both parties calling for improvements to the country’s aging bridges, roads and airports. Representative Nancy Pelosi (D-CA) has stated that House Democrats will use their new majority to seek deals with President Trump on infrastructure spending. 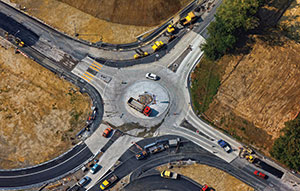 Infrastructure could be one of a few areas of partnership between Democrats and Republicans, with members of both parties calling for improvements to the country’s aging bridges, roads and airports.

With many new legislators being sworn in, IREM and its members will need to introduce themselves to several first-term Congressional representatives in 2019 and possibly reintroduce themselves to other returning lawmakers. When the new Congress convenes in January, 20 percent of its members will be new. In fact, Washington, D.C., has witnessed a great deal of turnover in recent years. Since the 2010 midterms, nearly one-third of the House and two-thirds of the Senate has turned over.

“To assist our members in getting acquainted or reacquainted with federal legislators,” said Debbie Prejeant, CPM, vice-chair of the Legislative and Public Policy Committee, “IREM has developed two types of letters that members can use when contacting legislators. Both outline how IREM can assist them with property management issues; one will be for communicating with new members, introducing them to IREM and congratulating them on being elected, and the other will be for reaching out to incumbents, commending them on defending their seats.”

Several initiatives are on the 2019 calendar to help support IREM’s priorities and increase elected officials’ education and awareness of commercial and multifamily real estate management.

IREM will be returning to D.C. on March 5-6 with its Capitol Hill Fly-In. IREM President Don Wilkerson, CPM, explained why the association is planning this event: “The objective is to provide members an opportunity to personally meet with their federal legislators and advocate for issues critical to the real estate management industry.” Moreover, the Fly-In “allows members to be part of something bigger than themselves while helping federal legislators understand the importance of a healthy real estate industry.”

IREM conducted its inaugural Congressional briefing, titled “Federal Policies and Their Impact on Real Estate,” last July. The event was a great success, with IREM Members presenting to over 60 Congressional legislative staffers. The outcome was so beneficial, a second briefing is being planned for July of this year. Stay tuned to irem.org for more details about this event.

Even with the Fly-In, IREM still encourages members to meet with their federal legislators in their district offices. Since Congress is on recess for the entire month of August, this month is an excellent time to make appointments with legislators to discuss industry issues. Although meetings at district offices may be preferred, there are other options for connecting with representatives, should a district office meeting not be viable. Attending one of the legislator’s scheduled events, like a town hall meeting, is a possibility. Or, be the host instead of the guest and invite representatives to a chapter event or to take a property tour.

Ted Thurn (tthurn@irem.org) is director of government affairs at IREM Headquarters in Chicago.

The case for hiring a CPM to manage federally assisted...

Always on your side