There is no question that technology has changed how work gets done. It eliminates tedious and repetitive processes, while at the same time creating a stressful “always on” culture and a sense of constantly being behind the curve. When all is said and done, how satisfied are those who work in the property management space with the technology tools available to them? 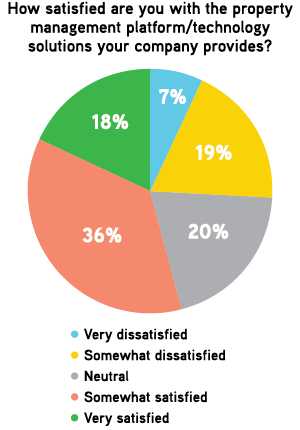 It appears many of them are reasonably satisfied. According to a survey conducted in June of IREM Members in the U.S. and Canada, slightly more than half indicated they are somewhat or very satisfied with the technology solutions and platforms their companies are providing, with another 20.2 percent falling in the neutral category. Only 6.9 percent defined themselves as very dissatisfied with the technology provided by their employers.

In terms of the technology being used, historically, one of property management’s principal tools has been the ubiquitous spreadsheet. And while spreadsheets continue to be a go-to technology among many of those who responded to the IREM survey, there has been some movement away from spreadsheets and toward software that automates processes, eliminates manual entry (and the errors that often come with it) and improves visualization of data.

Members were asked: “Spreadsheets vs. Software—Which is your primary go-to technology?” When it comes to such processes as maintaining rent rolls and accounting, the majority say they have moved toward software as the primary tool: 84.74 percent are primarily using software for rent rolls, and 71.02 percent for accounting. Indeed, of the eight activities identified in the spreadsheet vs. software battle, software is being used by a larger percentage of members than spreadsheets across the board, and in some cases, significantly so.

A total of 513 IREM Members, half of them CPM designees, responded to the survey – a kicking-off point for IREM’s initiative to provide its members with greater guidance and support in developing technology strategies for their properties and their companies.

Nancye Kirk (nkirk@irem.org) is chief strategy officer at IREM Headquarters in Chicago and liaison to IREM’s Technology Advisory Board.

Getting the most out of virtual leasing technology

An introduction to blockchain technology for real estate professionals