A look at reclaimed land projects in Bahrain and Japan

At first glance, the countries of Bahrain and Japan could not be more different. The former is a kingdom in the Middle East with 1.4 million residents, while the latter is a constitutional monarchy in East Asia with a population of over 120 million. Bahrain’s economy has been largely driven by oil production and financial services, while Japan grew into a major, diversified economy in the 1970s and ’80s.

One critical geographical feature links these two countries and creates challenges for property managers working there: Both Bahrain and Japan are island countries with limited land resources, which has resulted in large reclaimed land projects.

Between 1987 and 2013, nearly 50 square miles of land were reclaimed from the sea in Bahrain, increasing the landmass of the country’s main island group by 12.5 percent. Japan has been reclaiming land from lakes and the sea since the 12th century, and currently 0.5 percent of the total landmass—over 700 square miles—is reclaimed land.

Two CPM Members from Bahrain and Japan have provided JPM with a look at reclaimed land projects in their countries.

The Kingdom of Bahrain, the “Pearl of the Gulf,” has grown significantly over the past 10 years, but the government’s “Bahrain 2030 Vision,” which has set a clear road map on transformation, can only be made possible with further land expansion.

Reclaimed land projects help promote significant economic growth. The site areas range from 1 to 20 million square meters and house major developments. The projects are zoned under “special projects,” which allow for grade-A master plan communities and mixed-use buildings. This combination allows property developers to avoid complex site assembly costs in areas that have pre-existing surroundings. Because they are working with a “blank slate,” developers are also able to avoid mismatches. 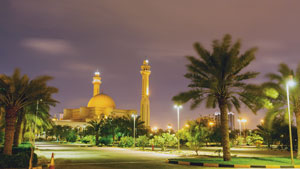 However, the absence of infrastructure can be an obstacle for those managing the property located there. An example of this is Juffair, a neighborhood located on reclaimed land that is a new home to many residential and hospitality properties, as well as the new National Library and Al Fateh Mosque, which is Bahrain’s largest mosque. Unfortunately, the area lacks properly laid roads, drainage facilities and access. Property managers have struggled to attract and retain tenants, leading to high turnover rates.

Reclaimed land projects also rely on completing a “critical mass” of developments. In many cases, only 20 percent of projects in a master development on reclaimed land get completed in five years, and the rest take another 10 years to complete. The master developer must recover the costs for common infrastructure from every subdeveloper from day one. When this doesn’t happen, it can lead to poor maintenance and a lack of support from service providers, thus negatively affecting the quality of the property management.

The lack of sufficient electrical power in one master development with many high-rises and luxury projects led the developers to implement a district cooling system (DCS). These systems have environmental advantages because they efficiently provide cooling to a number of buildings in the area, but they require a sufficient level of occupancy in order to function properly. The DCS draws in water from the ocean, cools it down, channels it through buildings and then returns it to the ocean. It must be returned at a certain temperature, which can only be achieved with certain occupancy.

Keeping up with service charge payments is another issue particular to reclaimed land. For example, a private residential development will often charge its tenants two services fees—one for the master development that covers private roads, security patrol and lighting, and another related to specific property services such as cleaning, security, elevators and air conditioning. Many managers find it extremely difficult to collect on these charges as tenants struggle with their mortgage, service charge and utility payments.

Despite the issues, the culture is slowly changing, and the projects in reclaimed lands are progressing well. For instance, a new master developer near the airport carefully considered these limitations and has provided the infrastructure and amenities well in advance, thanks to the government approving the fulfillment of these conditions by the development.

Japan and Bahrain have had a close relationship for many years. Coincidentally, JGC Corporation, a global engineering company that designs large energy projects, does work in Bahrain and has its headquarters in Yokohama Minato Mirai 21—known as Minato Mirai, or MM—an area of the city of Yokohama that is built on reclaimed land.

In 1859, Yokohama was a village of 100 households. Over the past 160 years, it has grown to a city of 3.7 million people, and its expansion has run up against Tokyo Bay. Minato Mirai is a waterfront area on Tokyo Bay close to Yokohama Station that has developed over the last 30 years. It reflects how planning organizations can help a district adapt and grow.

Companies and organizations on MM serve as members of the nonprofit organization (NPO) that determines the management policies of the district. This NPO was initially established in 1988, and in 1989 it put together a set of development rules for landowners. The agreement set standards for building use and height, rules for trees and the colors of scenery, and regulations for outdoor advertising. These informal agreements were passed into official law in 2008, and by 2018 there were 136 member groups involved in making decisions.

Minato Mirai differs from other developments in that it has comparatively more rules and regulations, making economic progress a top priority, which has its advantages and disadvantages. 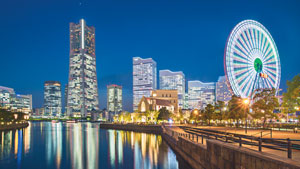 For example, not everything can be predicted. Because MM is on reclaimed land, there were no pre-existing infrastructure facilities, and in the beginning there was very little demand. In addition to geographic challenges, Yokohama struggled to attract corporations to the area because Tokyo, only 30 minutes away by train, is a popular destination for offices and commercial properties.

On the other hand, the collective decision-making and many regulations enable MM to respond more quickly to new regulations. One representation of this is energy conservation.

MM has been able to run pilot tests to reduce energy usage through “peak shift,” adjusting work hours to save energy and reduce demand during peak hours. MM is also supplied by an efficient district heating and cooling plant and self-distribution that uses “co-generation” methods to capture excess thermal energy. The NPO is collectively responsible for these facilities, which now supply 3.4 million square meters of space.

The development on MM is providing good prototypes for Japan. Many large office buildings are looking to partner with smaller buildings nearby for district heating and cooling systems, and in 2010 Yokohama was one of four municipalities selected by the government to serve as a Next Generation Energy and Social Systems Demonstration Area.

“Minato Mirai” literally means “Port of the Future,” and the management by the MM NPO is keeping the district focused on “advancement and being future-oriented.”